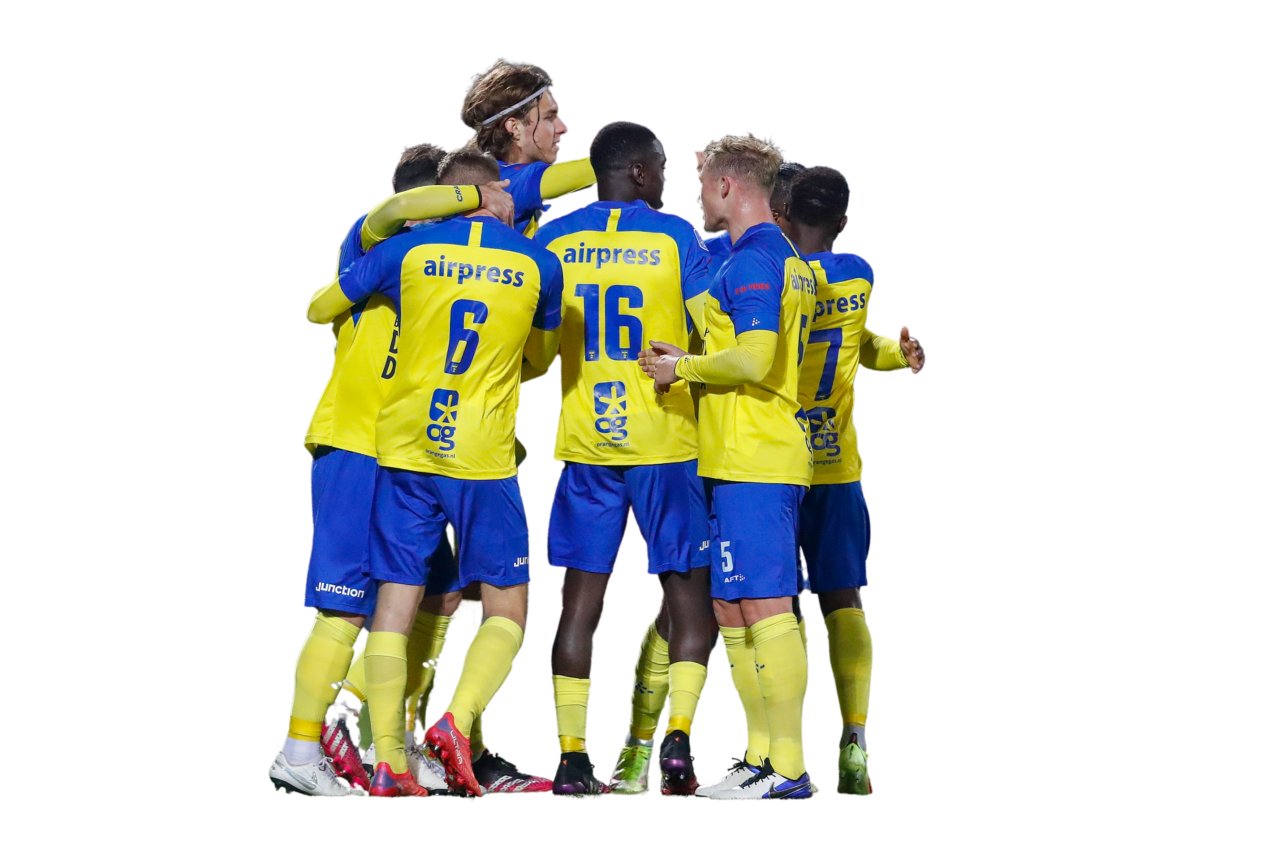 SC Cambuur-Leeuwarden finished 9th in the Eredivisie, less than a year after gaining promotion. Their remarkable rise has been due to a clear vision set by the management and a recruitment strategy led by data. So how did Cambuur get here?

As our partner,  SC Cambuur’s Technical Manager Foeke Booy sat down with us and spoke about building a foundation at the club and how the use of data is helping the club stay competitive despite a limited budget.

Journey back to Cambuur

After a successful career as a player and coach, Foeke Booy took some time off and travelled to clubs like Newcastle United and Manchester United to observe how things were developing in the top leagues.

“When you’re in the job, you don’t have time for this. But this is very important and I learnt a lot.”

In 2017, Booy was offered the position of Technical Manager of Cambuur and returned to the club where he started his playing career.

The job he took on was very ambitious – to build a new team and a new environment, and get the club back to the Eredivisie in time for the new stadium which is scheduled to open in the 2023-24 season. With the club winning promotion in the 2020/21 season, their progress is already ahead of schedule and we can see the pieces of the puzzle coming together. To reach their goal, the club would need to be patient and grow step by step, and the first step was to build a solid structure within the organisation.

Due to the club’s size, Foeke was in charge of everything- buying, selling and loaning players, overseeing the youth academy and also the full player environment including nutrition, sports science and sports performance.

Recruitment was key, and it started not only on the pitch, but also in the backroom. This meant getting the right people in the right positions in both the technical and medical departments.

In terms of the playing squad, Foeke says that it is crucial to clearly define how you want to play and then sign the right players to fit that philosophy.

“I am very proud of our vision and how we are a small team but we picked the right players with the right skills for the system which we played.”

SC Cambuur currently have the second lowest budget in the Eredivisie. So they need to manage their resources carefully, especially on the player recruitment side. According to Foeke, the club turned to data to help minimise the risk and maximise the chances of success in that area.

“At this moment, we have so much information on the SciSports platform. So I am very thrilled about the evolution in this because I like innovation and it helps me get the right information.”

“In the past, we’ve needed a lot of scouts to cover everything, but now you can also work with fewer people,” he adds.

It was also about not making wholesale changes at once.

“We made sure that the team stuck together, and we replaced only 15% of the team every season but kept 85% together, so we could build on our system and way of playing.”

But when you need to replace almost your entire squad over a few years, your player recruitment strategy needs to be very refined.

Clubs usually get several tips from agents and their own scouts. It is not possible, especially for a club with a small scouting department, to do video and live scouting for all these players.

“All the player tips that come to us are at the top of the funnel. So I use a lot of data to make the first analysis.”

When a club gets a player tip, they need to make a quick decision on the following:

Skill level: can the player adapt to the quality of the league?
Performance: what are the players strengths and weaknesses?
Physical attributes: do they have the physical abilities to play in our system and in the league?
Playing style: can they fit into the manager and club philosophy?

“As a technical manager, I have to be lower in that process and not in the first part.” says Foeke.

This is where data can play an important role, by helping validate tips rather than only relying on the agent’s opinion.

The goal is not to just buy cheap but more importantly to do so in the most efficient way possible.

The SciSports Recruitment Application covers 190,000+ players from 250+ global leagues and can answer the above questions. Clubs can now be more efficient in the initial stage of scouting process by filtering their player shortlist down for deeper analysis.

“There is a lot of detail and we can know how someone is without the ball in pressing and everything. And when I see the games, it compares quite well,” he adds. Player recruitment is a very complex process, and data scouting is only the first step.

In any search, watching a player by video is particularly important. You do this not only to match up with what the data is saying, but also for more intangible factors such as out of possession traits and game intelligence.

Live scouting on the other hand can highlight behavioural and mental aspects of the player that currently cannot be measured using data and can be missed in video footage.

Foeke talks about why he also wants to see the player live.

“We can do a lot with data, but I also trust my eyes because I can see the player’s behaviour and how they act with their teammates, coaches and even towards the opposition players.”

He goes on to add, “The mentality part of it is also very important, but that’s the last part of it.”

Using the Recruitment Application to guide a transfer search is useful to make sure your scouts are at the right games to watch the most relevant players on the clubs’ shortlist. So data insights can be very powerful when used in combination with video and live scouting.

How SciSports supports clubs in their recruitment process

At this moment, we have so much information on the SciSports platform. So I am very thrilled about the evolution in this because I like innovation and it helps me get the right information.

Like most Dutch teams, Cambuur has better knowledge of talent within the Netherlands. According to Foeke, there is a higher possibility to uncover some hidden gems here.

“For example, nobody was looking for Sekou Sylla, but I knew him because I had already seen him play in the amateur leagues. He has high potential so it is possible to pick up such undervalued talent in Holland, as we know little bit more about how things are.”

In the past, Cambuur had a set-up where the scouts would use different platforms, and put reports of games on their computer. The system was low level, but it worked.

However Foeke knew that it also had huge limitations.

“A year ago when I asked my scouts to do the same in Belgium, Scandinavia and Germany, they said that it was too big for them. So we needed to make a change.”

It is not possible to do video and live scouting for all the players that you receive tips for. The biggest advantage of using data in scouting is that it enables you to easily scout in international markets.

“Most players I get tips for are from international leagues. While there are many good players in these countries, we cannot always physically be in France, Belgium, Germany or Scandinavia.”

In this way, using data helps clubs scouting at the top of the funnel to get an overview on players from all parts of the world and then filter the list down to a more manageable number.

“This is where I use the SciSports platform. If they have desirable metrics in physical and performance, and also a good fit in playing style, then I’m going to pass it on to my second scout. So it takes a lot of work out of my hands.”

Access to a global player database has unearthed signings such as Latvian striker Roberts Uldrikis, who was signed from Swiss club FC Sion. “We had a tip from an agent. And from that moment, we checked him on platforms like SciSports. Then from SciSports we went into the video.”

This data first approach has proved very successful for the club.

Control over your own data processes

For your data strategy to work, you need to have a clearly defined philosophy and a consistent flow of information throughout the club. But after setting a data process in place, it is important for the club to have control over that data.

“I wanted everything to be recorded in the data. And it must be independent of any one person working at the club. This way the club can depend on it and not just on one person. Because if the person is gone then everything is gone.”

Building such a database can take years and many resources, so it is important to take steps to ensure the long term sustainability of the project.

SciSports can take the role of a data partner and support the club in taking ownership of this valuable resource. Customisable features such as labels and shortlists when used alongside the insights from the platform, can help the club staff collaborate and structure the way they evaluate players.

“For example, one of our scouts left, and we lost our data bank and three years of work was gone. So now SciSports helps us on how to build up a data bank. That gives us a lot of confidence to move on.”

Get to know SciSports' unique solutions 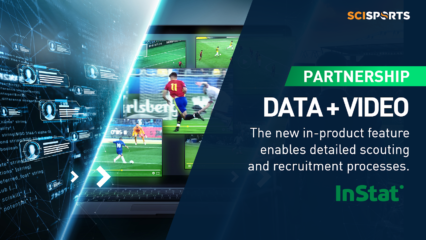 SciSports and InStat bring data and video scouting together